To most people, accuracy and precision mean the same thing: to someone involved in the field of instrumentation and measurement, the two terms should be considered as different. In basic mathematics, we are taught to count, but not taught to measure. One way in which this distinction is known is through the difference between a poll (a measurement) and a vote (a count). The result obtained from counting will be an exact result (barring blunder), while the result obtained from a measurement will only approach the truth. We are taught how to deal with exact numbers, but are sometimes not aware of the nature of results we obtain from approximated or measured values.
Measurement, by its nature, is not exact; the magnitude of that “inexactness” is the error. This is distinguished from a blunder, which is the introduction of an error that can be traced back to its source, and therefore an error that may be detected, quantified and corrected. A blunder is an actual mistake in the application of a measurement, such as misreading a scale or mis-adjustment of an instrument. Error is inherent in measurement, and incorporates such things as the precision of the measuring tools, their proper adjustment, and competent application. The analysis of the magnitude of probable error is appropriate in examining the suitability of methods or equipment used to obtain, portray and utilize an acceptable result.
The best way to show the difference between both the parameters is through the eyes of a marksman, to whom the “truth” represents the bullseye.
Precision
The degree of refinement in the performance of an operation, or the degree of perfection in the instruments and methods used to obtain a result is called precision. It mainly refers to an indication of the uniformity or reproducibility of a result. Precision relates to the quality of an operation by which a result is obtained, and is distinguished from accuracy, which relates to the quality of the result.

In the figure above, the marksman has achieved a uniformity, although it is inaccurate.This uniformity may have been achieved by using a sighting scope, or some sort of stabilizing device. With the knowledge gained by observation of the results, the marksman can apply a systematic adjustment (aim lower and to the left of his intended target, or have his bow and arrow to achieve more accurate results in addition to the precision that his methodology and equipment have already attained.
Accuracy
The degree of conformity with a standard or the truth is called accuracy. Accuracy relates to the quality of a result, and is distinguished from precision, which relates to the quality of the operation by which the result is obtained. In the figur below, the marksman has approached the truth, although without great precision. It may be that the marksman will need to change the bow and arrow or skills used to obtain the result if a greater degree of precision is required, as he has reached the limitations associated with his bow and arrow and current skills. 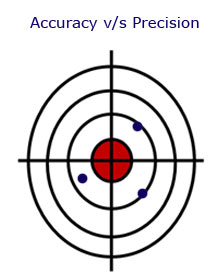 Th figure above represents results indicating both accuracy and precision. It differs from the first figure in that the marksman has probably made one of the systematic adjustments that was indicated by his attainment of precision without accuracy. The degree of precision has not changed greatly, but its conformity with the truth has improved over the results obtained in first figure.
If the marksman from the second figure determines that his results are not enough for the task at hand, he has no other choice than to change his current method or his bow and arrow. He has already performed to the limitations of these.
An additional benefit can be obtained by using a methodology that brings great precision. The analysis of results obtained from techniques yielding a high degree of precision will make the detection of blunders easier. 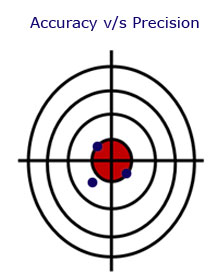 In the figures shown below, we have introduced a blunder into the results associated with accuracy and with precision. Given the degree of precision represented in the first figure below, it is easy to detect the blunder. It would be easy to analyze the results represented in the second figure shown below, and overlook the blunder. Without a high degree of precision, the blunder may go undetected and uncorrected, thereby affecting the total accuracy. 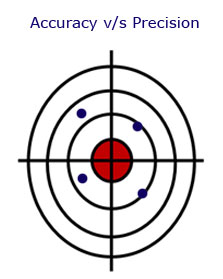 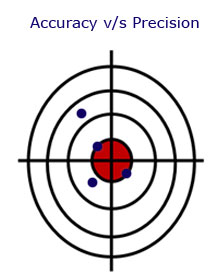 The analysis of precision can be misleading if a certain degree of precision is implied but not actually attained. To overstate an example, suppose someone were to use a vehicle odometer to measure the distance from one town to another, but measure from the last even mile (as indicated on the odometer) with a tape measure. The result could be represented with an implied precision expressed in feet, but the underlying accuracy is no better than the measurement obtained by the least precise method. It is a misleading sense of comfort that is provided when the implied precision expressed is not in agreement with actual methodology used.
In surveying, the need for greater precision usually leads to greater costs. To obtain a higher degree of precision, it may be necessary to use a more complicated/costly equipment or a more time-consuming methodology. The surveyor must determine what methodology and resultant precision is needed to achieve the accuracy required for a task at hand.