A pyrometer is a device that is used for the temperature measurement of an object. The device actually tracks and measures the amount of heat that is radiated from an object. The thermal heat radiates from the object to the optical system present inside the pyrometer. The optical system makes the thermal radiation into a better focus and passes it to the detector. The output of the detector will be related to the input thermal radiation. The biggest advantage of this device is that, unlike a Resistance Temperature Detector (RTD) and Thermocouple, there is no direct contact between the pyrometer and the object whose temperature is to be found out. 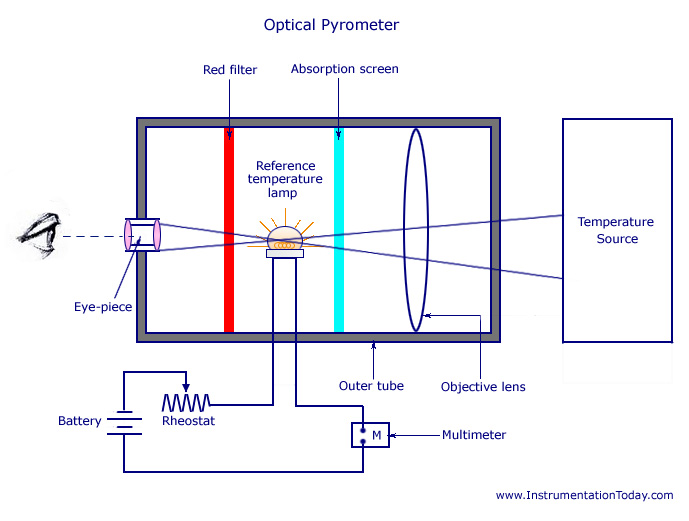 As shown in the figure above, an optical pyrometer has the following components.

The radiation from the source is emitted and the optical objective lens captures it. The lens helps in focusing the thermal radiation on to the reference bulb. The observer watches the process through the eye piece and corrects it in such a manner that the reference lamp filament has a sharp focus and the filament is super-imposed on the temperature source image. The observer starts changing the rheostat values and the current in the reference lamp changes. This in turn, changes its intensity. This change in current can be observed in three different ways.

1. The filament is dark. That is, cooler than the temperature source.

2. Filamnet is bright. That is, hotter than the temperature source. 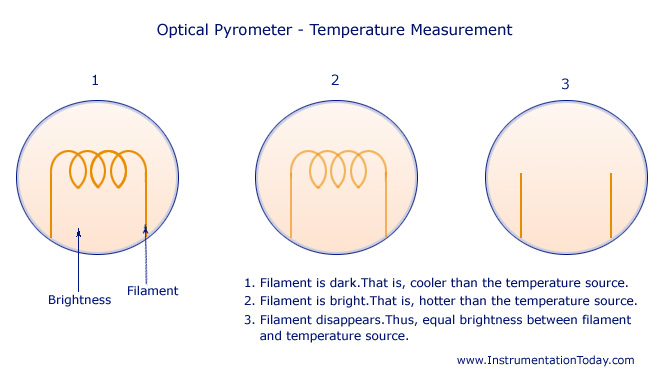