When pressure waves are released into the flowing fluid, their velocity and amplitude are affected by the fluid velocity. Ultrasonic flowmeters help in measuring these pressure wave changes, especially in the ones having frequencies greater than 20KiloHertz using specialized techniques. There are two types of ultrasonic flowmeters. One of them is based on the measurement of phase shift between the waves directed downstream and upstream alternately. The other one is based on the measurement of separation of frequency of oscillation directed downstream and upstream simultaneously.

The working of Ultrasonic flow measurement system by measuring phase difference is shown in the figure below. The two peizo-crystals p1 and p2 working both as transmitter and receiver of signals alternatively are mounted conveniently, so that the ultrasonic signals are transmitted between them as well as through the liquid. Switch ‘sw’ is utilized to supply p1 and p2 alternately from an oscillator simultaneously connecting the detector to p2 and p1 respectively. The detector is designed to measure the transit time from upstream to downstream and vice versa via phase shift measurement. If C is the velocity of the ultrasonic wave and v is the fluid velocity, then for a distance b between the crystals pa and p2, the phase shifts between the two cases are

Phase shift difference is proportional to the liquid flow rate. 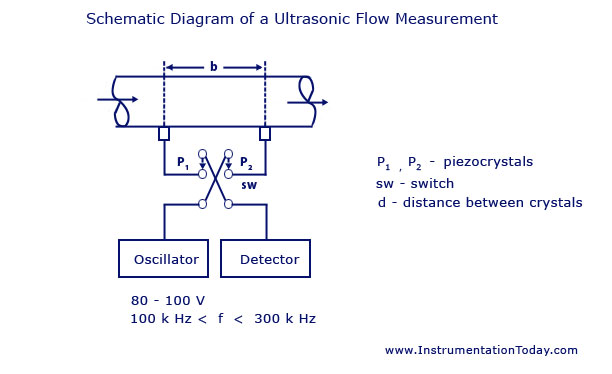 The measurement through this method using the phase shift method provides the instrument good linearity. The dynamic response is limited by the switching frequency. Material of the flow channel should be chosen not to allow acoustic transmission. Plastic is often chosen for the purpose.

The phase measurement flow system has also been used with interdigital transducers. Acoustic wave is transmitted and received across the flow line by two output transducers, one upstream and anther downstream equidistant from the transmitter. The transmitter has uniformly spaced metallic fingers for radiating the sound wave into the liquid from a solid-liquid boundary without focusing on either direction. Some transducers can act as receivers as well.

The working of Ultrasonic flow measurement system by measuring frequency difference is shown in the figure below. t/2 is the time over which the signal is received and is also the time over which the signal is not received by the receiver when the trigger works. Two sets of piezo-crystals, with the set consisting of a transmitter and a receiver, are mounted as shown in the figure and wave trains are sent at an angle a with the liquid flow direction The systems are in part, closed loop so that the receiver picks up the wave train, detects and sends it to the computing part of the amplifier. The amplified signal is used to retrigger the generator to send the second train of pulses. The repetition frequency will depend on the transmit time of the wave train across the length l. Thus, the frequencies can be written by the equations, 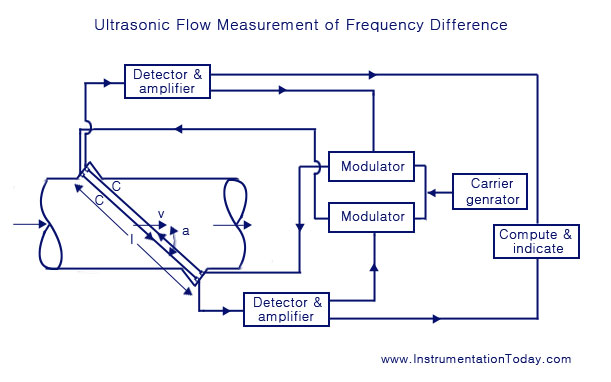