A capacitance pressure transducer is based on the fact that dielectric constants of liquids, solids and gases change under pressure. The figure below shows an arrangement of a cylindrical capacitor that can withstand large pressure. As the change in dielectric constant is quite small (only about ½ percent change for a pressure change of about 10 MPa), it is usable only at large change in pressure. Besides, the capacitance-pressure relation is non-linear and is affected by temperature variation. The measurement of this capacitance is done by a resonance circuit. The schematic is shown below. The oscillogram giving the variation of the output voltage with capacitance is also shown below. 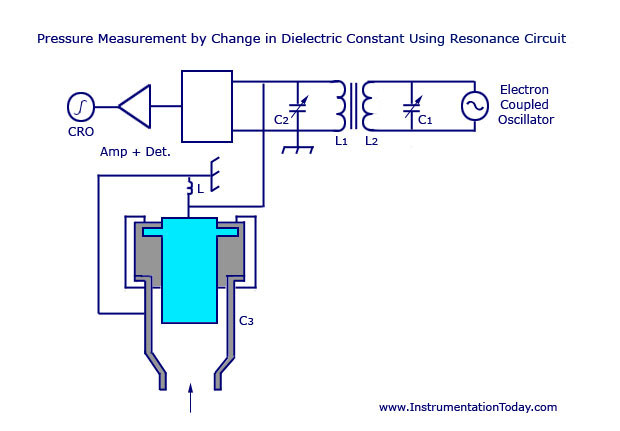 A basic capacitive transducer has already been explained (Refer: Capacitive Transducers). It consists of a pair of parallel plates with the middle plate moving with pressure and producing a differential capacitor system. The figure below shows a pressure gauge of this type. Spherical depression of the glass plate is less than 0.0025 centimetres. When a differential pressure exists, the thin steel diaphragm moves towards the low pressure side and the output voltage e0 measured as the difference of voltage e1 and e2 across the two capacitors formed with this movable plate is given by the equation

x – Displacement of the diaphragm

Such transducers are frequently used in pressure transmitter.