The basic principle behind the measurement of force is – when a force is applied on an object, the object gets displaced. The amount of displacement occurred can be calculated using the various displacement transducers, and thus force measurement can be done. This is an indirect method for calculating force. Some of the direct methods for measuring force are given below.

Force measurement through pressure can be done with two types of load cells. They are explained below.

As shown in the figure given below, the inside chamber of the device is filled with oil which has a pre-load pressure. The force is applied on the upper portion and this increases the pressure of the fluid inside the chamber. This pressure change is measured using a pressure transducer or is displayed on a pressure gauge dial using a Bourdon Tube.

When a pressure transducer is used for measuring the value, the load cell is known to be very stiff. Even at a fully forced condition, it will only deflect up to 0.05mm. Thus, this device is usually used for calculating forces whose value lies between 500N and 200KiloN. The force monitoring device can be placed at a distance far away from the device with the help of a fluid-filled hose. Sometimes there will be need of multiple load cells. If so, a totaliser unit has to be designed for the purpose.

The biggest advantage of such a device is that it is completely mechanical. There is no need of any electrical assistance for the device. They can also be used for calculating both tensile and compressive forces. The error percentage does not exceed more than 0.25% if the device is designed correctly.

The device will have to be calibrated according to the temperature in which it is used as it is temperature sensitive.

The working of a pneumatic load cell is almost same to that of a hydraulic load cell. The force, whose value is to be measured, is applied on one side of a piston and this is balanced by pneumatic pressure on the other side. The pressure thus obtained will be equal to the input force applied. The value is measured using a bourdon tube. 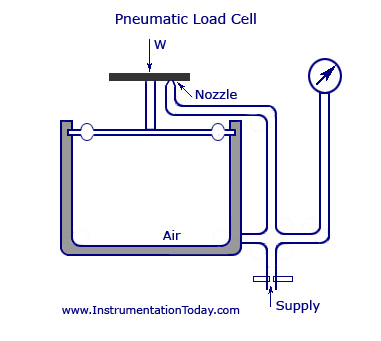 The strain gauge can be replaced with a Linear Voltage Differential Transformer (LVDT) inside a load cell to know the displacement of an elastic element. The device is best suitable for dynamic measurements as it has good features like high resolution and hysteresis.

Another device most suitable for the measurement of force in an elastic element is the capacitive load cell. With the device, the displacement can be calculated by measuring the capacitance. The sensor has two parallel plates with a small gap in between. According to the force applied on the device, there will be a change in length of the spring member, which in turn changes the gap distance between the plates and produces a proportional capacitance. This measured capacitance value will be proportional to the force applied.

Optical fibers can also be used to design an optical strain gauge to measure force. When a force is applied on the force summing member, it causes a change in length of the optical fibers that are bonded to the strain gauge. If the level of strain is different for two optical fiber strain gauges, then the phase difference between the monochromatic beams that strike the optical gauges will be proportional to the value of force applied.

For obtaining a displacement value of high resolution, a device called interference-optical load cell can be used. A Michelson Interferometer is used to measure the amount of force that has caused the change in shape of the fork-shaped spring. The highest amount of elastic deformation and along with it, the strain of the material need not be as large as in the case of the strain gauge load cell. The spring is made of quartz with very little temperature dependence.

The principle of resonance is used in the force transducer of vibrating elements. If a tuning fork load cell is used, the transducer will have two parallel band plates connected at both ends and will be made to vibrate in opposite directions. The change in resonance thus caused will be proportional to the force applied. The transmission and reception of the signals are carried by two piezo-electric elements kept very close to the fork.