Manometer is also called a liquid column manometer and is used for low differential pressure measurement. The usual range of pressure that falls for this device is around 0.2 MPa or 2 Kg/cm2. This device is used for most cases as it is very simple in construction and highly accurate of all the types.

There are basically two types of manometers.

There are also variations of the above said basic types called Enlarged-Leg Type Manometer, and Inclined Tube Manometer. Another manometer used commercially is the Ring-Balance Type Manometer.

A simple u-tube manometer is shown below. If ‘dm‘is the manometric fluid density, ‘d1’ is the density of the fluid over the manometer, ‘P2’ is the atmospheric pressure (for general measurement of gas pressure) and ‘P1’ is the gas pressure, and also if d1<<dm, then the differential pressure can be obtained by the relation 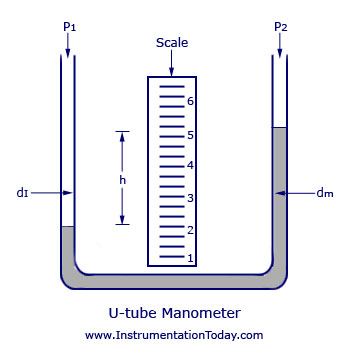 An enhanced version of a manometer is shown below with a seal liquid over the manometer liquid to separate the process fluid from the manometer fluid for any probable source of trouble like absorption, mixing or explosion and so on. Seal pots with large diameters are also placed for increasing the range. The equation for differential pressure is the same as mentioned above. 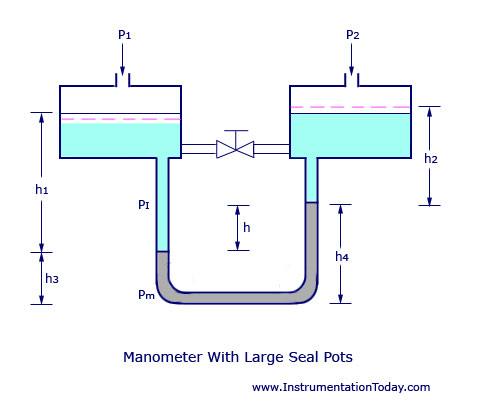 The main difference between a U-tube manometer and a well type manometer is that the U-tube is substituted by a large well such that the variation in the level in the well will be negligible and instead of measuring a differential height, a single height in the remaining column is measured. If a1 and a2 are the areas of the well and the capillary, and if (h1-h2) is the difference in height in the well due to the pressure difference (p1-p2) as shown, at balance, then

The figure of a well-type manometer is shown below. 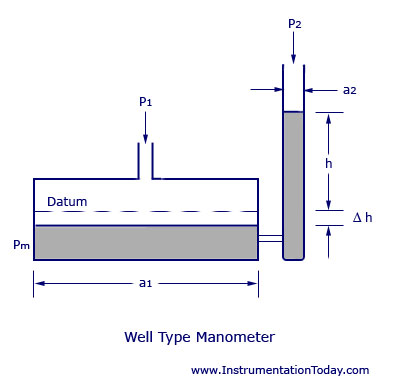 In the enlarged-leg manometer, a2 is not negligible compared to a1. It has a float in the enlarged-leg which is utilized for indication or recording. The two legs can be changed for changing the measurement span. Thus, the equation becomes,

The figure of an enlarged-leg manometer is shown below. 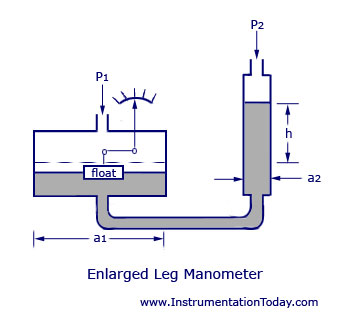 The inclined tube manometer is an enlarged leg manometer with its measuring leg inclined to the vertical axis by an angle b. This is done to expand the scale and thereby to increase the sensitivity. The differential pressure can be written by the equation,

The factor cosb expands the scale of the instrument. When b is quite large, h can be increased such that (h.cosb) remains constant. The figure of an inclined tube manometer is shown below. 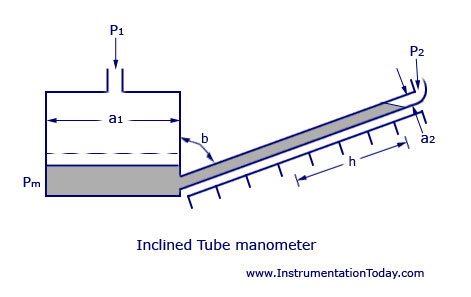 The micromanometer is another variation of liquid column manometers that is based on the principle of inclined tube manometer and is used for the measurement of extremely small differences of pressure. The meniscus of the inclined tube is at a reference level as shown in the figure below, viewing through a magnifier provided with cross hair line. This is done for the condition, p1=p2. The adjustment is done by moving the well up and down a micrometer. For the condition p1 not equal to p2, the shift in the meniscus position is restored to zero by raising or lowering the well as before and the difference between these two readings gives the pressure difference in terms of height.

Manometer is shown above as a static measuring device. Its dynamics can rarely be ignored. Considering manometric fluid as a free body, the forces acting on it are

This device cannot be actually called a manometer, but it is often considered so. The tube is made of polythene or other light and transparent material. This tube is bent into in to the form of a ring and is supported at the centre by a suitable pivot. The tubular chamber is divided in to two parts by spilling, sealing, and filling with a suitable light liquid like kerosene or paraffin oil for isolating the two pressures. Pressure taps are made with two flexible tubings. Pressures p1 and p2 act against the sealed walls as shown in the figure below, and rotate the ring which is balanced by the counter weight w.

Of the various manometric fluids used, mercury has many advantages like low vapour pressure, non-sticky nature, and wide temperature range from -20 degree Celsius to 350 degree Celsius. Its high density is disadvantageous for low differential pressure measurements. The device installation and maintenance is known to be quite expensive.