The figure below shows the arrangement of strain gauges that are mounted on a cantilever spring which is operated by a pair of opposing bellow elements. The cantilever is properly chosen in dimension for compensation in the change in the Young’s modulus due to temperature changes. 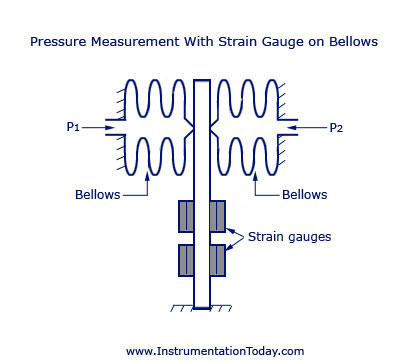 The figure below shows an arrangement if strain gauges on to a flat diaphragm. Usually four gauges are   mounted as shown and they are connected in a bridge circuit as shown in the figure. Radial and tangential stresses are developed in the diaphragm gauges complicating the measurement of true pressure. 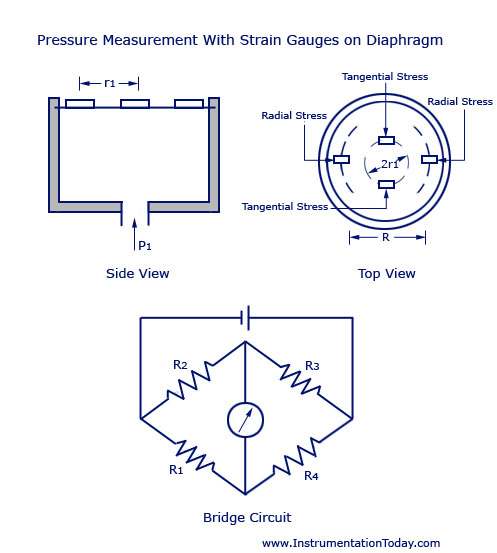 In recent years miniaturization is effected where the discrete gauges are replaced by a rosette which is available in various sizes. The rosettes may be configured such that the radial strains at the edge of the diaphragm and tangential strain near the centre are easily picked up while the solder points/tabs are located in a low strain region.

Unbounded strain gauges can also be adopted for measuring strain and in consequence pressure with a diaphragm. A simple schematic of such a pressure measurement is shown in the figure below. Emperical calibration for all the above cases is always preferred. 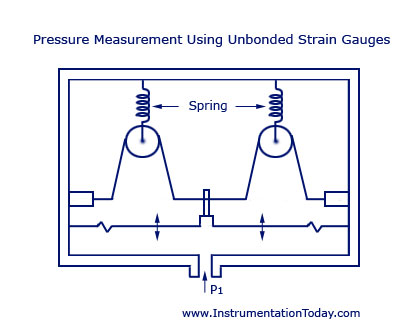