Some other types of temperature sensors are

Before going into detail, it is important to know some of the basic temperature parameters and instrumentation systems.

The term ‘temperature’ can be defined in terms of heat. Heat is a measure of the energy contained in a body, which is due to the irregular motion of its molecules or atoms. The internal energy of body or gas increases with increasing temperature. Temperature is a variable which together with other parameters such as mass, specific heat etc. describe the energy content of a body. When energy in the form of heat is introduced to or extracted from a body, altered molecular activity will be made apparent as a temperature change.

To measure the value of temperature, some of the following phenomenon is needed.

In an industry, there is always a need to measure and monitor temperature of a particular spot, field or locality. The industrial names given to such temperature sensors are Temperature Indicators (TI) or Temperature Gauges (TG). All these temperature gauges belong to the class of instruments that are known as bimetallic sensors.

Two basic principles of operation is to be followed in the case of a bimetallic sensor. They are 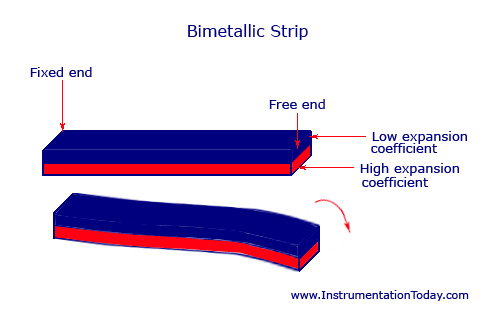 A change in temperature causes the free end of the strip to expand or contract due to the different co-efficients of expansion of the two metals. This movement is linear to the change in temperature and the deflection of the free end can be read out by attaching a pointer to it. This reading will indicate the value of temperature. Bimetallic strips are available in different forms like helix type, cantilever, spiral, and also flat type.

The figure below shows the working of a bimetallic sensor. Two metals, blue and red are riveted together. If it is used in an oven, the red metal would expand faster than the blue metal. If it is used in a refrigerator, a rise in temperature causes the blue metal to expand faster than the red one. As a result the strip will bend upward and short circuits with a metal wore so that current begins to flow. If the size of the gap between the strip and the wire is adjusted, you can control the temperature. 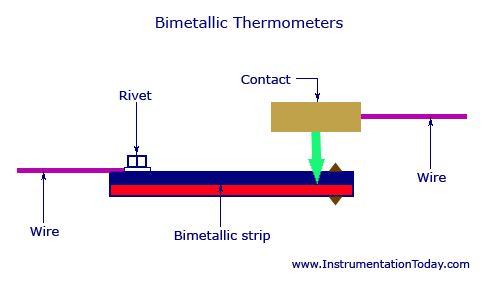 Bimetallic thermometers are generally available with 2, 3, 4, 5 or 6-inch concentric dials, preferably of the non-parallax type (i.e. not visually misaligned or displaced), with external zero adjustment, and 1/2-inch mounting thread.  The stem should be of Stainless Steel SS316), having a 1/4-inch diameter, and of a customized length to suit process requirements. The dial orientation may be bottom or back, known as “straight” or “angle”, respectively.  However, an all angle adjustable swivel connection is preferred in order to enable the dial to be read from the most convenient location.

If the temperature to be measured is not required for automatic control, recording, or indication in the control room, a bimetallic thermometer should be used.

Occasionally a temperature transmitter, recorder and/or controller has to be installed in a location or under circumstances where electrical power is not available or inconvenient to use, while instrument air (at 20 psig or above) is present.  Under these circumstances, a filled system thermometer is an ideal choice because it can be combined with a commercially available pneumatic transmitter, recorder and/or controller.  If a local temperature measurement is in an inaccessible location so that a bimetallic thermometer cannot be easily read, a filled system thermometer is recommended because its capillary tubing can be led to an indicator that can be installed/located in a convenient place.

A liquid filled thermometer should be considered for corrosive areas or where vibration is a problem.

Listed below is some temperature measurement applications for which the use of a RTD is normally preferred over a thermocouple:

Thermocouples are not suitable for narrow range temperature measurements.  This is because the change in the EMF developed by a thermocouple over a narrow temperature range is very small and difficult to measure.  Therefore, for narrow spans or small temperature differences a RTD is recommended.