What is an Accelerometer?

An accelerometer is a transducer that is used to measure the physical or measurable acceleration that is made by an object. Co-ordinate acceleration cannot be measured using this device. (Refer: Acceleration Transducer) 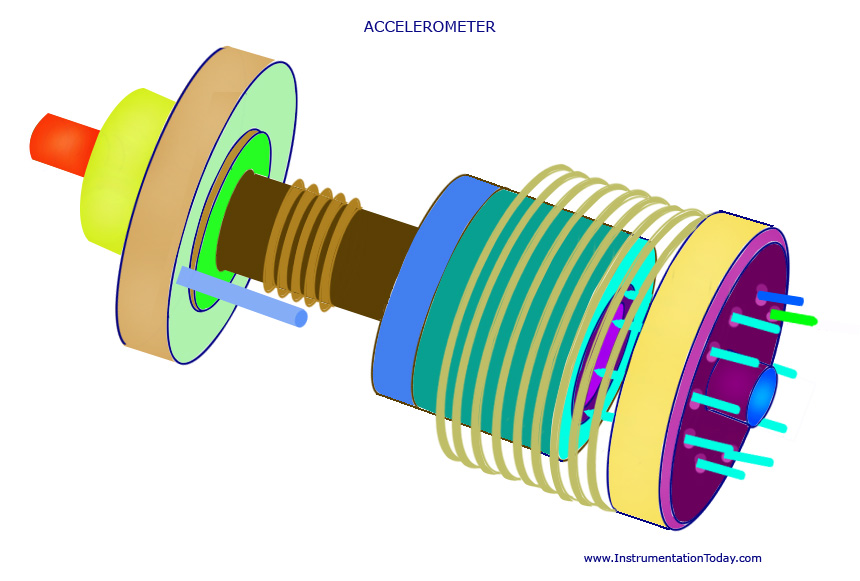 An accelerometer is an electro-mechanical device that is used to measure the specific force of an object, a force obtained due to the phenomenon of weight exerted by an object that is kept in the frame of reference of the accelerometer.

The most commonly used device is the piezoelectric accelerometer. As the name suggests, it uses the principle of piezoelectric effect. The device consists of a piezoelectric quartz crystal on which an accelerative force, whose value is to be measured, is applied.

Due to the special self-generating property, the crystal produces a voltage that is proportional to the accelerative force. The working and the basic arrangement is shown in the figure below. 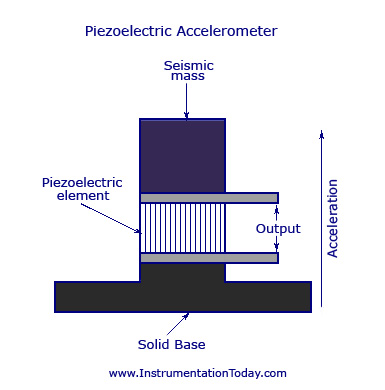 As the device finds its application as a highly accurate vibration measuring device, it is also called a vibrating sensor. Vibration sensors are used for the measurement of vibration in bearings of heavy equipment and pressure lines. The piezoelectric accelerometer can be classified into two. They are high impedance output accelerometer and low impedance accelerometer.

In the case of high impedance device, the output voltage generated in proportion to the acceleration is given as the input to other measuring instruments. The instrumentation process and signal conditioning of the output is considered high and thus a low impedance device cannot be of any use for this application. This device is used at temperatures greater than 120 degree Celsius.

The low impedance accelerometer produces a current due to the output voltage generated and this charge is given to a FET transistor so as to convert the charge into a low impedance output. This type of accelerometers is most commonly used in industrial applications.

In industrial applications, the most commonly used components to convert the mechanical action into its corresponding electrical output signal are piezoelectric, piezoresistive and capacitive in nature. Piezoelectric devices are more preferred in cases where it is to be used in very high temperatures, easy mounting and also high frequency rang e up to 100 kilohertz. Piezoresistive devices are used in sudden and extreme vibrating applications. Capacitive accelerometers are preferred in applications such as a silicon-micro machined sensor material and can operate in frequencies up to 1 kilohertz. All these devices are known to have very high stability and linearity.

Nowadays, a new type of accelerometer called the Micro Electro-Mechanical System (MEMS) Accelerometer is being used as it is simple, reliable and highly cost effective. It consists of a cantilever beam along with a seismic mass which deflects due to an applied acceleration. This deflection is measured using analog or digital techniques and will be a measure of the acceleration applied.

Selection of the device depends on the following factors.