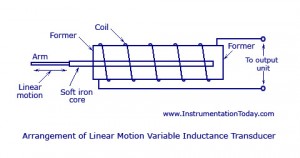 The device consists of an arm that moves linearly according to the displacement produced. It also consists of a single coil wound on a former with ‘N’ number of turns. The end of the arm is connected to a soft iron core which moves linearly along the axis of the former. Thus, reluctance ‘R’ will be produced due to the flux path. The coil inductance of the device can be written by the equation, L= N2 /R.

1. There will not be problems due to mechanical hysteresis.

2. Provides a good response to static as well as dynamic measurements.

1. The frequency response is controlled by the construction of force ring members.

2. Accuracy errors may occur due to the interference of external magnetic field.