Like other inductive transducers, this transducer is also used for converting a linear motion into an electrical signal. The basic construction of an LVDT is explained and shown in the figure below.

The device consists of a primary winding (P) and two secondary windings named S1 and S2. Both of them are wound on one cylindrical former, side by side, and they have equal number of turns. Their arrangement is such that they maintain symmetry with either side of the primary winding (P). A movable soft iron core is placed parallel to the axis of the cylindrical former. An arm is connected to the other end of the soft iron core and it moves according to the displacement produced.

As shown in the figure above, an ac voltage with a frequency between (50-400) Hz is supplied to the primary winding. Thus, two voltages VS1 and VS2 are obtained at the two secondary windings S1 and S2 respectively. The output voltage will be the difference between the two voltages (VS1-VS2) as they are combined in series. Let us consider three different positions of the soft iron core inside the former.

From the working it is clear that the difference in voltage, VS1-VS2 will depend on the right or left shift of the core from the null position. Also, the resulting voltage is in phase with the primary winding voltage for the change of the arm in one direction, and is 180 degrees out of phase for the change of the arm position in the other direction. 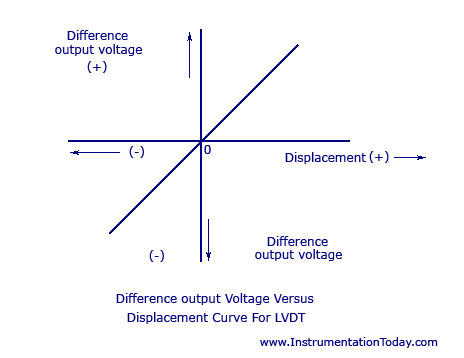 The graph above shows the plot between the resulting voltage or voltage difference and displacement. The graph clearly shows that a linear function is obtained between the output voltage and core movement from the null position within a limited range of 4 millimeter.

1. Maintains a linear relationship between the voltage difference output and displacement from each position of the core for a displacement of about 4 millimeter.

2. Produces a high resolution of more than 10 millimeter.

3.Produces a high sensitivity of more than 40 volts/millimeter.

4. Small in size and weighs less. It is rugged in design and can also be assigned easily.

1. The whole circuit is to be shielded as the accuracy can be affetced by external magnetic field.

2. The displacement may produce vibrations which may affect the performance of the device.

4. The efficiency of the device is easily affected by temperature. An increase in temperature causes a phase shift. This can be decreased to a certain extent by placing a capacitor across either one of the secondary windings.

5. A demodulator will be needed to obtain a d.c output.