There are mainly two types of proximity inductance transducers. They are

This transducer consists of a primary and secondary coil. The constructional diagram of the transducer is shown below.

An ac source is given to the primary. This ac source excites the primary and a flux is produced. This flux is linked to the secondary coil and thus a voltage ‘V’ is induced. If the mutual inductance between the primary and secondary windings is represented by ‘M’ (Hertz) and the frequency of ac excitation is represented by ‘w’, then the voltage ‘V’ developed in secondary coil can be written as V = MwIp.
Ip – The current due to excitation in primary (Amperes).

As shown in the figure, a ferromagnetic displacement plate is placed very near to the windings. The current in the primary coil produces a magnetic flux that links with the secondary coil through the displacement plate. Thus, the movement of the ferromagnetic plate to the right causes a greater value of flux linkage between the two terminals. This in turn causes an increase in the resulting output voltage across the secondary terminal with a value of (T1-T2). This output is given to the input of the CRO or a recorder and the amount of displacement can be known in terms of voltage. A

1. The device is small when compared to other transducers.

2. Wear and tear is minimized as there is no physical contact between the target and coil configuration.

3. The output value will be accurate for small displacements as there is a linear relation between the output voltage and linear displacement.

4. There will not be any external effects by contamination.

5. The device works accurately even at higher temperatures up to 400 degree Celsius.

1. The accuracy decreases when it comes to the measure of large displacement. This is because the linear relation between voltage and displacement is less at higher ranges.

2. The external magnetic field may cause harm to the ferromagnetic material.

This device can be set up in two ways. Both the diagrams are shown below. 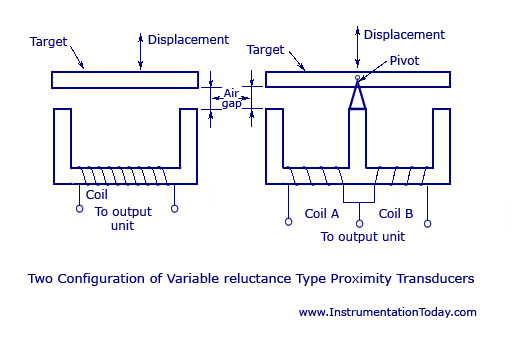 The device consists of a coil that is wound on a core made up of ferromagnetic material. The displacement is given to the core through a target that makes an upward and downward movement according to the displacement produced. It does not touch the core of the coil and a smaller air gap is made between them.
When the target moves closer to the coil due to the displacement, the air gap becomes less causing the reluctance of the magnetic field to reduce and thus the coil inductance to increase. The value of inductance keeps on varying according to the variation in target movement. A CRO or a recorder takes these values and displays it to the user.

In the right side figure shown above, an E-type core is used for finding the displacement. The target is also pivoted at the central limb of the core. Thus, a single coil is divided into two turns and the end of each coil works as the arms of an inductance bridge.

As the displacement value changes, an output signal is produced. This is given to a CRO after amplification.

The biggest advantage of this device is that it shows a linear relationship between the output and the displacement.