Thermistor is a resistance thermometer, similar to a Resistance Temperature Detector (RTD) and is used for temperature measurement. It consists of a non-metallic resistor that is used as the temperature sensing element. 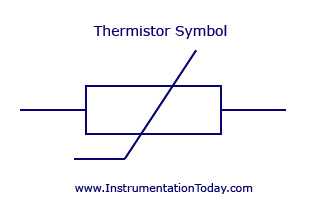 Both devices work on the same principle that a constant current flowing through the resistor, and its changing resistance due to change in temperature, is measured as a voltage drop across it. The main difference is that the electrical resistance of the resistor used in a thermistor varies in a non-linear manner with respect to temperature. The sensing element used in the thermistor is made up of either a ceramic or polymer, while RTD uses pure metals as its sensing element. Another major difference is in its operating range. Due to its high sensitivity, thermistors are used in narrow span measurements and low temperature ranges from -20 degree Celsius to +120 degree Celsius. But RTD’s are used over wide and larger temperature ranges.

The device is manufactured from materials like sintered mixtures of oxides of metals such as manganese, nickel, cobalt, and iron. Their resistances range from 0.4 ohms to 75 mega-ohms and they may be fabricated in wide variety of shapes and sizes. Smaller thermistors are in the form of beads of diameter from 0.15 millimeters to 1.5 millimeters.  Such a bead may be sealed in the tip of solid glass rod to form probe which is easier to mount than bead. Alternatively thermistor may be in the form of disks and washers made by pressing thermistor material under high pressure into flat cylindrical shapes with diameter from 3 millimeters to 25 millimeters. Washers may be stacked and placed in series or parallel to increase power disciplining capability.

The resistance versus temperature curve is one of the main characteristics that is used in measurement, control and compensation applications using a thermistor. The characteristics graph is shown below. 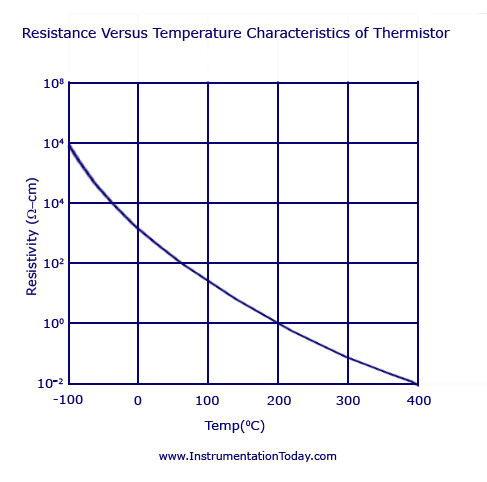 Resistance Versus Temperature Characteristics of Thermistor

The device is connected in series to a battery and a micrometer. A change in temperature causes a change in the resistance if the thermistor and the corresponding micrometer current reading is noted. Usually, the meter is calibrated in terms of temperature with 0.1 degree Celsius resolution. As shown in the figure, a bridge circuit is also used so as to increase the thermistors sensitivity.

For studying about the different types of thermistors, it is important to understand the formula which shows the linear relationship between resistance and temperature.

where, dR – Change in Resistance 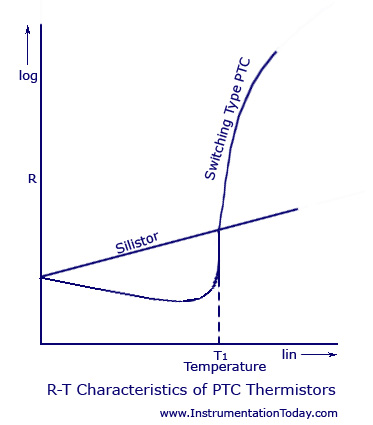 NTC Thermistors that are used in industries are broadly classified into two. Thus classification is based on the method by which the electrodes are placed on the ceramic body. This main category could be further divided depending on the different types of geometries, shapes and processing methods. One of the main categories that is most commonly used in the industries is the bead type thermistors.  According to the shape and manufacturing methods, bead thermistors can be again classified into Bare Beads, Glass Coated Beads, Ruggedized Beads, and Bead in glass Enclosures and many more.

Another group of NTC Thermistors is the ones with metalized surface contacts. These thermistors can be mounted using spring contacts or by surface mounting.