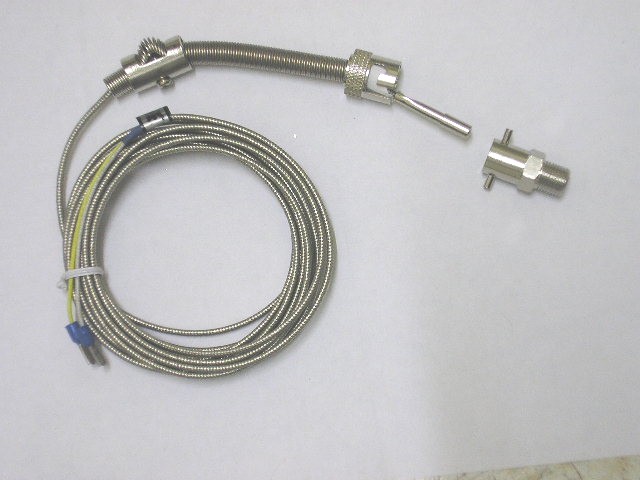 The wires must be electrically separated beyond the measuring junction.  If the reference junction is kept at a standard temperature, usually 32°F, then a given pair of metals will have a unique variation of EMF as the measuring-junction temperature is changed (note that at 32o F there is no EMF generated).  This variation can also be called thermocouple calibration, and is shown in the figure below for its different types.

Circuit for Temperature Measurement by Thermocouple 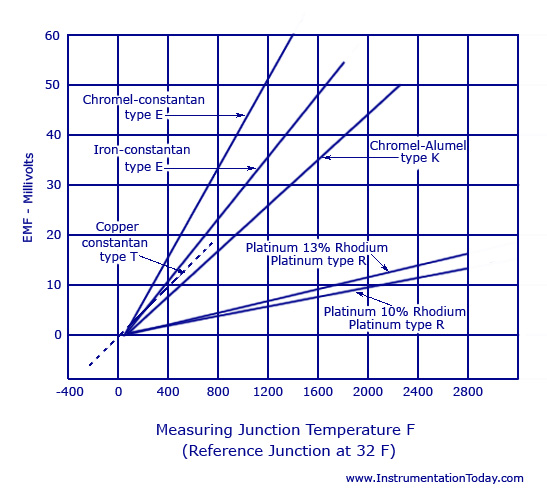 Thermocouple measurement is explained along with a figure shown below. The figure shows a thermocouple circuit with T2 at 32°F (0° C). This temperature is maintained with the help of an ice-bath reference junction.  The thermocouple circuit ends in the ice-bath,  the generated EMF flow through standard copper wire until it reaches its final destination, – a millivolt meter type instrument.  The millivolt value sensed by this instrument is then converted into a temperature T1. Tables are available for every commercially used thermocouple material combination and they are based on the reference junction temperature of 0°C/32°F.

There are a lot of thermocouple material types and these combinations are approved and standardized by the American National Standard ISA MC 96.1: “Temperature Measurement Thermocouples” in USA.  The standards must be followed for the different device designations as well as its color coding.

According to ISA MC96.1 standards, the thermocouple can be designated with the different combinations of letters like “E”, “J”, “K”, “T”, ”S”, ”R”. Four of the most popular thermocouple wire combinations are almost always identified by their trade names:

Thermocouple wires are expensive because they are fabricated to very stringent quality control requirements.  Therefore, it is customary to change to so-called “thermocouple extension” wires at the closest (to the point of measurement or hot junction) convenient connection point.  These connection points must be isothermal to each other.  These thermocouple extension wires are less expensive because they are fabricated to less stringent quality requirements.

In order to distinguish among different types of thermocouple wires their insulation is color-coded.as per the standards of ISA MC 96.1.The different thermocouple conductor combinations, their operating ranges, and color coding as per the international standards are shown below. 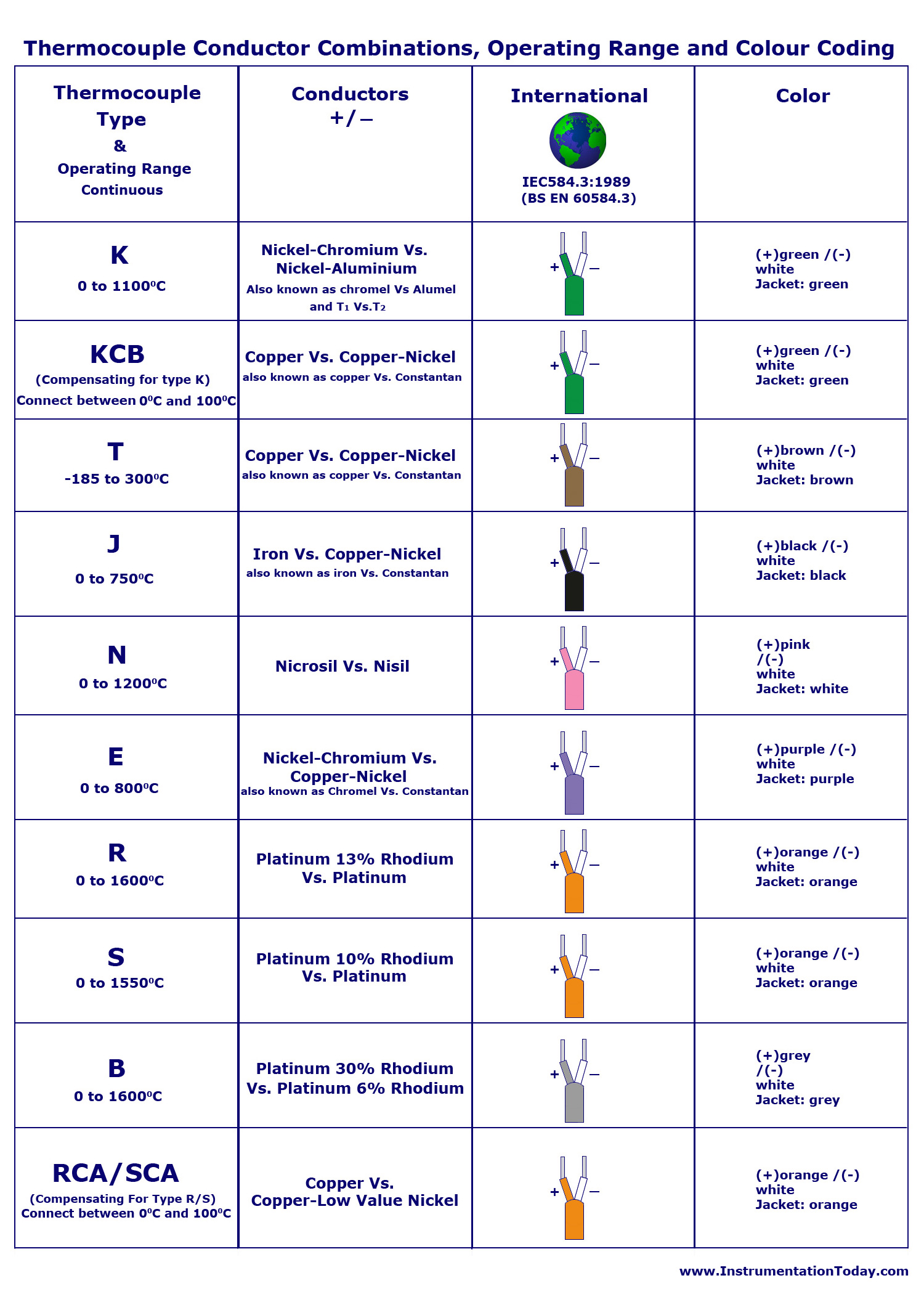 A thermocouple used for industrial applications has three junctions. They are

1. Exposed Junction – This junction is directly exposed to the environment. As a result its life is very less. Though it has a very high response time, it is not frequently used.

2. Ungrounded Junction – This junction has very minimum response time, but is known for its incredible electro-magnetic shielding properties. It is used mostly for the measurements on electrical equipment, but is usually suitable for many process applications as well.

3. Grounded Junction – The response time of this is more than ungrounded junctions and also provides good shielding properties for most process applications.  It is preferred for most of the oil and gas industries and process industries for control applications because of its speed of response.

Sometimes, a thermocouple has to be installed inside a Thermowell for providing protection. This is applicable only in cases where the temperature of a fluid flowing inside a pipe is to be measured. To do so, a probe is to be sheathed and enclosed in a corrosion resistant tube. Typically, the sheath should be a quarter inch in diameter and the probe should be spring-loaded so as to make a strong contact with the bottom of the Thermowell.  A screw-cover head is used for electrical connections.  In the probe the thermocouple wires are separated from each other and the sheath by means of ceramic insulation material such as Magnesium Oxide (MgO) or Aluminum Oxide (Al2O3).

Some variations of thermocouple probe are explained below.

Clamp-on Thermocouples – As the name suggests they are clamped to a pipe, and thus presses the measuring junction against the pipe. This method is applicable only in places where a temperature measurement is desired for which normal provision was not previously made.  This thermocouple may be useful in trouble-shooting a process. The output may not be so accurate unless the point of measurement and the surrounding area are well insulated from the outer environment. Another type of the clamp-on thermocouple is the skin couple that is used mostly to measure furnace tube and reactor surface temperatures. Skin couples can either be tack welded to the surface being measured (furnace tubes) or clamped on (reactor walls).

The figure below shows a washer type thermocouple that is to be installed on the pipeline and temperature transmitter for this application. 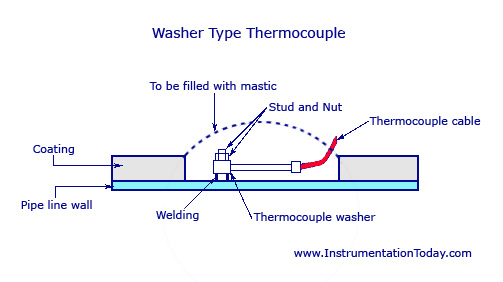 Duplex Thermocouples – Duplex thermocouples are very similar to the conventional thermocouple except that this device has two pairs of thermocouple wires in the measuring junction. There may be two Alumel and two Chromel wires, joined together and the wires are brought out in two separate circuits to provide two individual measurements.  The two temperature readings should then be identical, assuming that both circuits are otherwise similar.  This may be useful for checking one instrument against the other, especially by using a test voltmeter locally to determine whether a remote reading is inaccurate because of the instrument or because of circuit problems.

As the whole device can be made in one assembly, the cost of production is very less. But, if either one of the two thermocouple circuits fail due to measuring junction problems or short circuit, the whole device will have to be replaced. Thus, it is less reliable than two single thermocouples. Furthermore, if one pair of a duplex thermocouple is used for checking, then there is a risk of shorting or grounding the other pair of wire.

Thermocouple circuits can be either grounded or ungrounded (floating or insulated). Generally grounded thermocouple circuits are recommended for personnel safety, to reduce the effects of electrical noise and provide good thermal response characteristics. Ungrounded thermocouples should be considered for applications where equipments are likely to get damaged due to ground faults or lightening strikes particularly in tank farm areas.

Thermocouple grounding should be done to the low- or negative-potential side of the circuit, and should be done at the source rather than at the secondary instrument in order to achieve maximum rejection of common-mode noise.  There is a normal practice that any electrical or electronic circuit should be grounded at only one point s as to avoid a ground current in the circuit. With this rule in mind, thermocouple grounding is carried out in one of the following ways – It is always good practice to ground the thermocouple measuring junction or ground the thermocouple elsewhere than at the measuring junction.

Thus, thermocouples can be classified according to the manner in which they are grounded.

Thermocouples may be either:

The different combinations of thermocouple type, grounded intermittently /unintentionally grounded, or ungrounded; of secondary instrument type, isolated input/output or not; and of output grounding are shown in the figures below.

Thermocouple systems used with DCS are shown below. 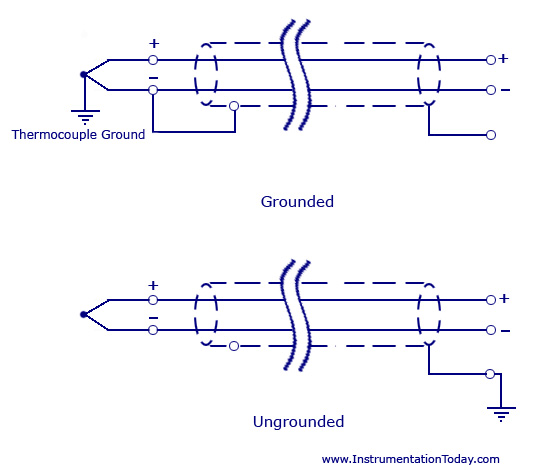 The best way to minimize the interference of such electrostatic fields is to cover the thermocouple wires with a grounded metal shield. The capacitive current flow will flow through this shield to the ground.  The purpose of the shield is to remain at or near ground potential, and thereby couple no signal to the signal wires contained within the shield, since there is no difference in voltage.  Note that a shield that is not grounded provides no protection.

Common mode interference generates noise that is identical in both conductors of a twisted pair with respect to ground.

The most frequently used thermocouple assemblies/probes are provided with a thermocouple head that is the screw-cover type; is weather-proof, high-temperature provided with gaskets; has terminal block for single or duplex thermocouple, as appropriate. The cable entry shall be as per specific project requirement. The terminal shall be ceramic based spring loaded type.

Like a thermocouple, a thermopile is also a device that is used to measure temperature in terms of electrical energy. The device is actually a combination of a number of thermocouples in series or parallel connection. Series connection is commonly used for most applications.

The device is capable of generating an output voltage, that will be a measure of the temperature difference or temperature gradient. Its response to absolute temperature is minimum. The output is in the range of millivolts.

The device finds its application as a part of temperature sensors, like the infrared thermometer, a device used to calculate body temperature. They are also used as safety controls in heat burners and heat flux sensors. They can also be used to produce electrical energy, that is, by dissipating the heat from electronic devices. It is also used for spatial temperature averaging.

Leave a Reply to thermocouple