McLeod Gauge is a vacuum gauge that uses the same principle as that of a manometer. By using the pressure dividing technique, its range can be extended from a value of 10-4 Torr. The basic principle is called the multiple compression technique. It is shown in the figures below. If there are two bulbs A and B connected with the McLeod and test gauges through capillary tubings, the pressure on the right hand side of the test gauge is very small and the capillary connection between T and bulb B very long, then the flow law can be written as

V- Volume of the bulb

dp2/dt – Pressure Gradient in time between the two elements

K – Flow conductance in the capillary.

As p2 is very small when compared to p1, the flow rate remains practically constant and is proportional to the pressure. This forms the basis of the calibration.

There are many variations of the McLeod Gauge. The basic construction is shown in the figure below. 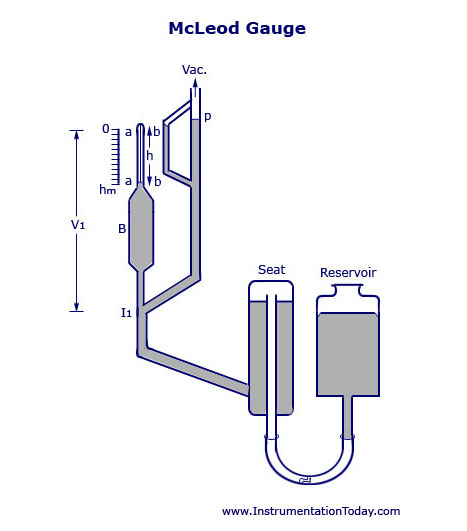 The McLeod gauge is independent of gas composition. If, however, the gas contains condensable material and during compression it condenses, the reading of the gauge is faulty. The gauge is not capable of continuous reading and the scale is of square law type. For linearizing the scale at comparatively higher pressures, a second volume is introduced as shown in the figure below, where the scale shown is linear. 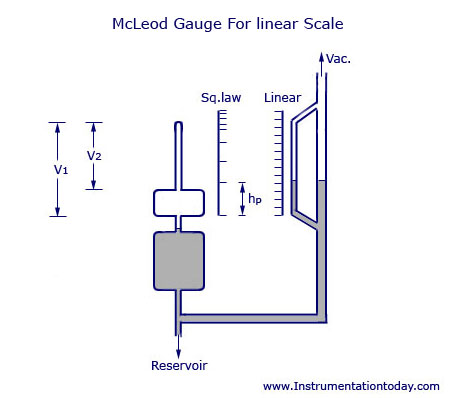