Micro-electro-mechanical Systems (MEMS) Technology is one of the most advanced technologies that have been applied in the making of most of the modern devices like video projectors, bi-analysis chips and also car crash airbag sensors. This concept was first explained by Professor R. Howe in the year 1989. Since then many prototypes have been released and revised and has thus become an integral part of the latest mechanical products available in the market today.

During its early stage, the MEMS chip had two parts. One part included the main structure of the chip and the other part included everything needed for signal conditioning. This method was not successful as the total space taken by the device was larger, and thus the different parts of a single chip needed multi-assembling procedures. The output obtained from such a device had less accuracy and the mounting of such a device was difficult.

As the technology became more advanced the idea of integrating multi-chips was applied on to produce a single chip MEMS with high performance and accuracy.

An accelerometer is an electromechanical device that is used to measure acceleration and the force producing it. Many types of accelerometers are available in the market today. They can be divided according to the force (static or dynamic) that is to be measured. Even today, one of the most commonly used one is the piezoelectric accelerometer. But, since they are bulky and cannot be used for all operations, a smaller and highly functional device like the MEMS accelerometer was developed. Though the first of its kind was developed 25 years ago, it was not accepted until lately, when there was need for large volume industrial applications. Due to its small size and robust sensing feature, they are further developed to obtain multi-axis sensing.

If two plates are kept parallel to each other and are separated by a distance‘d’, and if ‘E’ is the permitivity of the separating material, then capacitance produced can be written as

A – Area of the electrodes

A change in the values of E, A or d will help in finding the change in capacitance and thus helps in the working of the MEMS transducer. Accelerometer values mainly depend on the change of values of d or A.

A typical MEMS accelerometer is shown in the figure below. It can also be called a simple one-axis accelerometer. If more sets of capacitors are kept in 90 degrees to each other you can design 2 or 3-axis accelerometer. A simple MEMS transducer mainly consists of a movable microstructure or a proof mass that is connected to a mechanical suspension system and thus on to a reference frame. 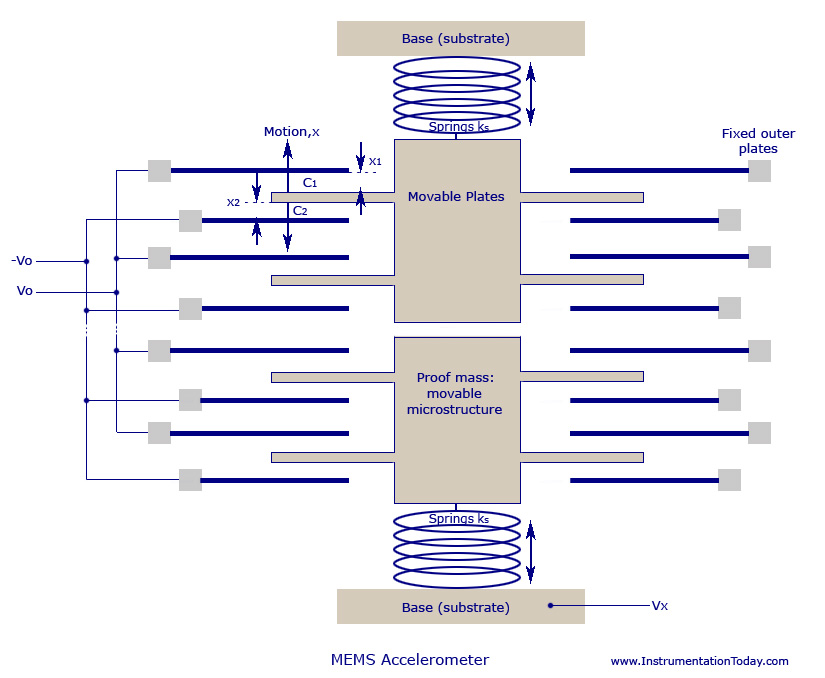 When acceleration is applied, the distance between the two plates displace as X1 and X2, and they turn out to be a function of the capacitance produced.

We can also write

The figure below shows the circuit that is used to calculate the acceleration, through change in distance between capacitor plates. The output obtained for different values of acceleration is also shown graphically. 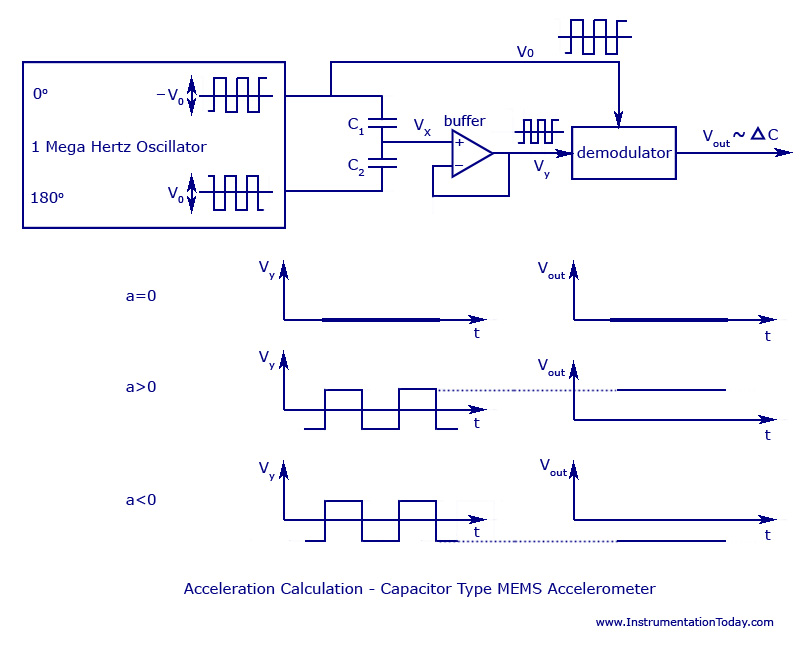 When no acceleration is given (a=0), the output voltage will also be zero.

When a deceleration is given, such as (a<0), the signals Vx and Vy become negative. He demodulator produces an output equal to the sign of the acceleration, as it multiplies both the values of Vy and V0 to produce VOUT, which has the correct acceleration sign and correct amplitude.

We must select the device in reference to its noise characteristics. If the acceleration value at low gravity condition is to be found out, the noise characteristics could easily affect its accuracy. An MEMS accelerometer is said to have three noise producing parameters – from the signal conditioning circuit, from the vibrations produced by the springs, and from the output measuring system.