The parameter used for the measurement of flow is the speed of flow, and is measured in terms of the potential difference induced when the moves in a tubing/pipe with a transverse magnetic field impressed. The working of an electromagnetic flowmeter can be understood from the figure below. 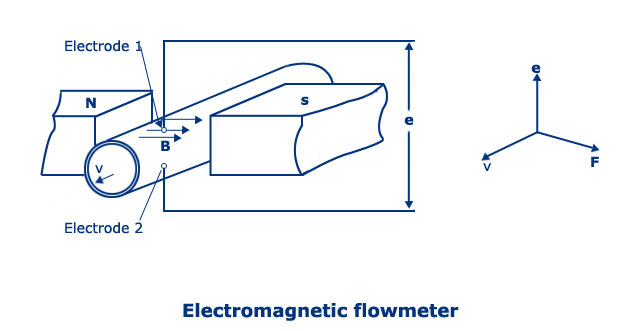 Suppose the flow of liquid whose conductivity is atleast about 10-5 S/cm and is flowing through an insulating tube of diameter‘d’ and is placed in a magnetic field of flux density ‘B’, then to a pair of electrodes mounted perpendicular both to the magnetic field and fluid, as shown in the figure above, a voltage ‘e’ is induced which is dependent on the flux density and liquid flowing velocity v, according to Faraday’s law.

The equation written above can also be obtained in a generalized way through Lorentz force which deflects the charge carriers in the fluid as the conductor in the magnetic field. The force F is given as

An insulating pipe is usually chosen to avoid short-circuiting and a non-magnetic pipe is selected for allowing the magnetic field to penetrate through the liquid. A plastic tube or a metal tube lined with neoprene is well suited. Some other materials that are used for lining are Teflon (PTFE), polyurethane, ceramic (99.5% Al2O3) base, and polysulphate. These are chosen also on the basis of process fluids, their corrosivity, temperature, and so on. The electrodes are usually of stainless steel mounted flush with the inside face of the tube. Titanium, tantalum, hastelloy have also been used.

The plane of the measuring electrodes is generally chosen to be vertical such that the formation of air bubbles or deposition of non-conducting solids does not break the electrical circuit.

As the measured quantity is in volts and since its magnitude is small, parasitic effects are to be carefully considered. Suitable amplifiers are necessary to amplify the signal. The input impedance of the amplifiers are to be properly selected since the liquid resistance between the electrodes for small conductivity liquids are larger than usual.