Optical type pressure measurement is receiving considerable attention in recent years where the movement of a diaphragm, a bellows element or such other primary sensors are detected by optical means. The principle is nothing new, but the technique of adaptation in commercialization is varied in nature. A typical case with a diaphragm and a vane attached to it that covers and uncovers an irradiated photo diode with changing pressure is shown in the figure below. 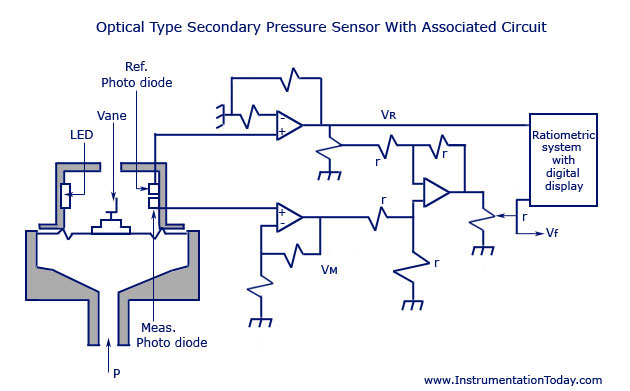 The circuit diagram shows that if any instant uncovering area of the photo diode is Am, and that of reference one is Ar, with other notations shown in the figure, the ratiometric output would be

Calibration may be made directly in pressure. The ratiometric technique is often preferred for avoiding drift error in electronic components as they are likely to be equally affected and cancelled. The vane movement or the diaphragm movement is kept small for negligible hysteresis and good precision. Diode signals have non-linearities which may also vary from unit to unit. The non-linearities are often linearised using look up table in programmable read only memories during A/D conversion process. The range may be adjusted from (0-400)MPa with an accuracy of 0.1 percent scan. Temperature, though compensated, affects measurement to a certain extent which, in zero scale may be compensated by auto-zeroing facility.

This system is often used as a null detecting one in a force balance type pressure measurement, where the servo-system brings the sensor to the zero balance point.