As discussed earlier, an Optical Pyrometer can be not only be used for temperature measurement, but also can be used to see the heat that is measured. The observer is actually able to calculate the infrared wavelength of the heat produced and also see the heat patterns by the object. But the amount of heat that the device can sense is limited to 0.65 microns. This is why the radiation pyrometer is more useful, as it can be used to measure all temperatures of wavelengths between 0.70 microns and 20 microns.

The wavelengths measured by the device are known to be pure radiation wavelengths, that is, the common range for radioactive heat. This device is used in places where physical contact temperature sensors like Thermocouple, RTD, and Thermistors would fail because of the high temperature of the source.

The main theory behind a radiation pyrometer is that the temperature is measured through the naturally emitted heat radiation by the body. This heat is known to be a function of its temperature. According to the application of the device, the way in which the heat is measured can be summarized into two:

As shown in the figure below, the radiation pyrometer has an optical system, including a lens, a mirror and an adjustable eye piece. The heat energy emitted from the hot body is passed on to the optical lens, which collects it and is focused on to the detector with the help of the mirror and eye piece arrangement. The detector may either be a thermistor or photomultiplier tubes. Though the latter is known for faster detection of fast moving objects, the former may be used for small scale applications. Thus, the heat energy is converted to its corresponding electrical signal by the detector and is sent to the output temperature display device. 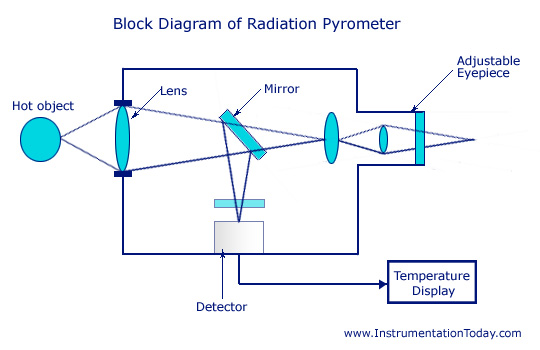